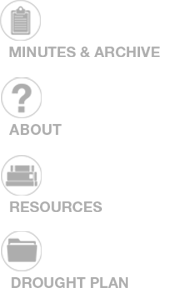 Nebraska's Climate Assessment Response Committee (CARC) was established by the Nebraska Legislature in 1991 with the approval of LB274. The most recent revisions to the legislation took place in September of 2014 and can be found here.

In June of 2000, CARC adopted the Drought Mitigation and Response Plan. The plan created and defined specific CARC committees designed to assist in the assessment and response duties:

WAOC meets at least three times a year: spring, summer, and fall, but may meet more frequently as needed during drought or other extreme climate conditions.

The Risk Assessment Committee held its first meeting September 22, 1998, as part of the revision and update to Nebraska's drought plan.

Purpose: To assess the vulnerability to and likely impacts of extreme climatic events, particularly drought, on Nebraska's primary economic, environmental and social sectors.

In advance of drought and other climatic events,

During drought and other extreme climatic events,

In the past volunteer subcommittee membership has included, but is not limited to, the following:


• Back to the top of the page

The Emergency Response Committee originally was considered a formal arm of CARC, charged with the responsibility for collection and dissemination of information essential for timely recommendations of any and all appropriate action that should be taken by the Governor's office regarding commercial and residential damage sustained because of floods, tornadoes, and other weather-related disasters. The committee's role was revised in June 2000 in response to existing drought conditions and further study of Nebraska state law. By statute, the Nebraska Emergency Management Agency (NEMA) is charged with responding to emergency situations, such as drought or floods, at the direction of the Governor. To avoid any overlap of duties, the ERC's role was folded into the NEMA organization, with the understanding that communication between CARC and NEMA will be important in times of weather emergency.

As an example of this cooperation, early in 2000 CARC began supplying Governor Mike Johanns with regular weather and agriculture information relative to the dry weather pattern. In June, based in part on the reports from CARC, the Governor declared a state of emergency due to the existing conditions and created a Drought Management Team, headed by NEMA. That group met regularly throughout the summer and fall to advise the Governor. CARC had representation on the Team.